A Brief History about the island of Madagascar

Madagascar is in the Indian Ocean, southeast of the coast of Africa. Madagascar is the fourth largest island in the world and its capital city is Antananarivo.

The first people thought to have travelled to Madagascar to live were from Africa’s eastern shores. These people were simple fishermen and set up home around the coastal areas of the island.  The island never changed very much with these new settlers, as they never exploited the land or the wildlife. These fishermen were only interested in the fish in the reefs around the coast. In time the African people began to split into a number of tribes. All these tribes still lived around the coastal areas.

Around 1300 to 1000 years ago new travellers from Malaysia, Polynesia and Indonesia began to arrive on this

Luscious un-spoilt island. These people were migrants in search of a better way of life and Madagascar looked the perfect answer. The migrants and the tribes began to merge and join together. The migrants taught the fishing tribes how to cultivate the forest areas. Soon some of the tribal people and the migrants moved inland to graze cattle and pigs on the untouched grassland. Once again the people began to split into separate tribes some living around the coast other inland.

It is said that the famous traveller Marco Polo also found the island of Madagascar. He told horror stories of extra large elephant birds with large talons that of which could carry off elephants, cattle and people to eat.

Below: Elephant bird of Madagascar 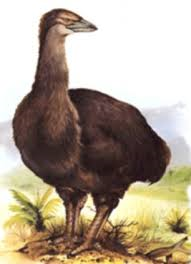 In the 13th century Arab traders came to the island and built mosques on the coast of Madagascar. The Arab traders were already trading goods and merchandise on the east coast of Africa and thought that Madagascar would be a good place to stop and rest before travelling home to restock again.

In 1500 a Portuguese explorer Diego Dias documented the discovery of Madagascar. He built and ran a settlement near what is known as Tolognara today.

After the slaughter of the Portuguese other powers also tried to colonise Madagascar. The Dutch and the British had temporary settlements here around 1500. This is where the story of the Coton de Tulears ancestors begins. The British always sailed with terriers, which were used to rid the ships of rats on long sea faring voyages. These terriers were also introduced to Madagascar to keep the crops and live stock safe. It wasn't just the British who travelled with small dogs most seafaring travellers travelled with them as it was the most efficient way of ridding ships of vermin. Terriers from Britain, Bichons from France and the Tenerife Terrier from the Canary islands are all thought to have some how come to the island of Madagascar at different times in history. These breeds maybe the ancestors of the Coton de Tulear.

The next settlers and the most successful early colonists were Pirates whom made their base Madagascar from around the late 1500's. This island was the perfect place for pirates to live and soon became known as Pirate Kingdom. The pirates were from all around Europe, many used to be in the English navy before turning to a life of crime. Pirates also travelled with small dogs to catch vermin aboard their ships. As time went on the pirates of Madagascar even had pirate law and order and elected a pirate government. Some pirates merged with the coastal tribes of the island. These fishing tribes learnt much from the pirate’s settlers and began a pirate flotilla of their own on the north West Coast.

Around 1600 all the different tribes of the island began to war against one another. The East Coast tribes, West Coast tribes and the migrants whom settled in the central highlands all wanted to take control of the whole of Madagascar. The turning point for all the settlers was when the European traders began to arrive for slaves. All tribes united and fought for their land and freedom and rid the island of the European slave traders. Gradually the settlers from the central highlands known as the Merina tribe took over the ruling of Madagascar. The king of this tribe was well-respected powerful and full of knowledge. He helped the Merina tribe become dominant and is still in a high position to this day.

In the late 1600's more and more Europeans settlers began to arrive, the Europeans brought with them what is thought to be the bichon. These settlers caused no trouble for the Merina tribe and all got on well. The merina tribe appointed a British man and a Frenchman into the council. Now that the Europeans had established powers with the merina a new British society began to emerge. Missionaries arrived from Britain and they evolved Malagasy, a written language of Madagascar for everyone who lived there to use. They translated the bible passages into Malagasy and Christianity was introduced.

A few royal leaders of the merina tribe were afraid of the impact the European influence was having on the people of Madagascar so an uprising occurred. Many Europeans were sent fleeing. The French and the British were irate with this situation of loosing power and began to fight amongst themselves about which country could claim Madagascar. The British decided to sign an accord with the French giving them the right to claim the island. In 1895 French troops surprised the tribes and fought and won the capital Tananarrive. The battle was a success, not many troops were killed because of the invasion, but over 10,000 did die from the affects of malaria. The tribes found malaria was a better defence than fighting the many French troops.

Through the centuries it has been an uphill battle for the royalty of the merina tribe to lose and reclaim control of their island from the many different settlers.

Nowadays Madagascar is under French rule but the royalty of the merina tribe are still well respected. Due to the over population of Madagascar the forests and grassland have nearly disappeared. Only 10% of the forestland is left, the rest is used for farming or housing.

A history of Madagascar by Mervyn Brow

Customs & Habitats of the Merina tribe of Madagascar by Kari Mason