Origins of the Coton de Tulear - Fact or Fiction?

The Origins of the Coton de Tulear

There are many stories of how the Coton de Tulear originated. It is believed that all seafaring travellers travelled with small dogs on board their ships to rid the ships of rats and vermin. Which breed of dog travelled on these ships depended on where the ships came from? As Madagascar had many different settlers colonising it, all these people travelled to the island aboard ships. It is thought that the settlers who came from Britain brought with them terriers, pirates from Europe also may have brought terriers or other small dogs and settlers from the Canary Islands brought with them the Tenerife terrier. All these dogs settled onto the island and protected the live stock and settlements from wild animals and vermin. These seafarer dogs were alleged to have been the first to live on the island of Madagascar.

The first story of the Cotons origin dates back to the 15th century. Ships were being sailed to the West Indies from France. These journeys were long and tedious. To help the ladies on board the ships from getting bored and lonely they often sailed with little white spirited dogs thought to be the ancestors of the Bichon Frise. These little dogs were also used to rid the ships of unwanted mice and rats, which would eat the sailor’s food. It was said that during a violent storm, one of these ships sank in the proximity of Madagascar, the ship name was not recorded and all people aboard the ship were thought to have perished. The little white dogs aboard managed to swim to the south-western coast of the island.

These dogs survived and began mating with the local terriers; the result of this relationship is the Coton de Tulear. The Coton de Tulear got its name from have a coat like cotton and Tulear the port in Madagascar where the Cotons were first found. The Cotons foraged for food and learned to protect themselves cunningly against larger predators in order to survive. They hunted wild boar in packs, and also crossed rivers using their intelligence, the rivers in Madagascar were infested with crocodiles, these reptiles patiently waited for the Cotons to attempt to cross the river. To swim across the river would be sheer suicide the Cotons used a diversion to reach the opposite bank. The Cotons looked for the narrowest part of the river then they ran to the widest part and began to bark and make as much noise as possible to attract the crocodiles to that part of the river. Slowly the crocodiles began to climb the riverbank following their feast, but the sly little Cotons sprinted back to the narrowest part of the river and swam across.

Later the natives began to notice the intelligence of the Cotons and fell in love with them; they domesticated and trained them. As there were no bridges in Madagascar they trained the dogs to bark at the crocodiles so that people could also cross the rivers. After a few hundred years the King and Malagasy nobles began taking an interest in the Cotons, they loved the dog’s elegance, beauty and character. In fact the king of Madagascar made it law that only people of "royal blood" could own and raise them. This law is what prompted the Coton de Tulear to become the royal dog of Madagascar, and it also has been honoured on a Madagascar postage stamp. 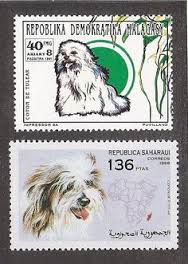 This next story is a little like the first. A ship came to the port of Tulear willing to trade some of their goods and merchandise. On the ships were the bichon dogs that caught rats or entertained the sailors by jumping and dancing on their hind legs. Once the ship had docked, the crew began trading their goods with the residents of Madagascar. On this day a member of the Merina tribe the Madagascar royalty happened to be at the port looking to trade some goods when he saw what is thought to have been bichons dancing and entertaining the crew and passengers. Astonished by the little dog’s abilities and intelligence, the man offered a large amount of goods worth a great deal of money for these dogs. Once again in time the bichons mated with the local terriers and the Coton de Tulear was born.

The next story of the Cotons origin is the most probable. When French settlers came to Madagascar they brought with them again what is thought to be the bichon, the bichons mated with the other local terriers and the Coton was born.

The last story is the least believable, when French troops came to the island to fight the merina tribe for the rule of the island, the French troops brought with them bichon dogs. Once again these dogs mated with the local terriers and the Coton emerged from the reunion. This explanation is quite odd, because normally the French troops didn't travel with dogs especially bichons, but the bichons could have been on board the ships, which the troops travelled on.

Whichever story is true about the Cotons origin; they still were clever enough to out smarted wild animals and were once again caught and domesticated again.

The first Cotons known to have left the island were thought to be taken to France before the Second World War. A French man allegedly helped the royalty of Madagascar and was paid Cotons, which was said to be a great honour.

Then later the French colonists also became owners of Cotons and paid a great deal of money to buy and take this very rare breed to Europe in the 1970 for breeding. So many Cotons left the island in the 70's it is said that the breed in Madagascar nearly died out, and the ones left began breeding with terriers and other breeds on the island changing the Cotons apperance once again from the dogs taken from the island.  Coton de Tulears were recognised as a breed in Madagascar by the Malagasy Kennel Club in 1968 and in 1971 the Coton de Tulear  was recognised as a rare and pure breed by the Federation Cynologique International (FCI). U'Rick was the first Coton to be registered by the FCI in 1972, however its possibly James (picture below in 1976) who is anscestor and in so many Cotons pedigrees to this day as the most recognised Coton 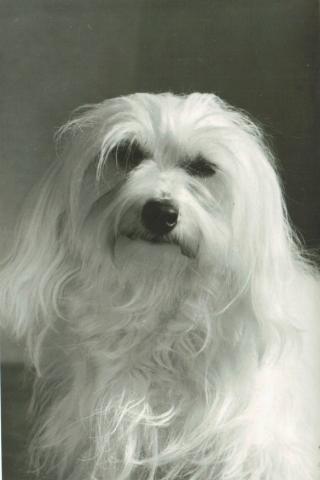 To this day the Coton is still a rare and desirable breed and still cost a great deal of money. The Coton de Tulears are still a very healthy and long lived breed.

A history of Madagascar by Mervyn Brow

Customs & Habitats of the Merina tribe of Madagascar by Kari Mason